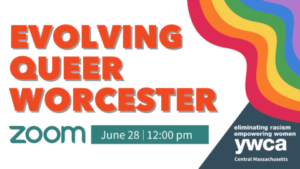 On Tuesday, June 28 we discussed the diversity in Worcester LGBTQIA+ communities, highlighting the history of Pride in Worcester- where we were, where we are now, and where we are going. Maritza Cruz, Director of Racial & Gender Equity, will moderate the program.

For the past five years, Al Green has been the Ministry Director of the LGBT Asylum Task Force- a ministry of Hadwen Park Congregational Church, UCC. He is a gay asylum seeker from Jamaica and a graduate of Worcester Polytechnic Institute (Worcester, MA). Al has assisted hundreds of LGBTQ asylum seekers to figure out a way to safety, access housing, navigate the asylum process, gain employment, and assimilate to life in the United States. He is also an avid swimmer and a lover of all things food.

The LGBT Asylum Task Force welcomes LGBTQ people of all faith traditions. We provide housing, food, and connection to legal, medical, and mental resources at other local agencies. Asylum seekers are not allowed to work for up to 2 years after arriving in the US. Our vital ministry provides comprehensive support for the entire duration of that two-year period in which it is needed.

QUEER THE SCENE (QTS) is a production and events group conceptualized by various Worcester queer community members, primarily committed to amplifying queer and BIPOC voices through local partnerships. QTS works with artists, scholars, organizers, and venues to produce queer-inclusive spaces that house creative expression. The team is comprised of a group of individuals committed to the growth of a healthy, vibrant, and equitable queer community.

Leo works at Kennedy Community Health as Supervisor of Community Health Workers. He has been a LGBTQ+ and public health activist and educator for over 30 years.  He has been a board member of various community groups: Worcester Gay and Lesbian Latino Organization, Central Mass Gay and Lesbian Community Coalition, HIV Consortium of Central Mass, among others. He is currently a member of the MDPH Latinx HIV/AIDS Advisory Group, Latino History Project of Worcester. He was a member of the LGBTQ History Project Community Advisory Committee.

He is originally from Puerto Rico and has lived in Worcester since 1985. He holds a Med in Health Education from Worcester State University.

Yolanda Walker:
Yolanda Walker is Co-Founder of DanceAway Sound Productions, with her wife of 16 years, dedicated to providing DJ Services to the LGBTQ+ community for the last 12 years.  She is a paralegal at Ellis & Associates by day, as well as a Cycling Instructor at the Central YMCA, Inc.  She was a member of the Worcester Pride Committee, the Logistics Coordinator for Womxn of Color Weekend, a member of the qFlix Worcester Film Festival.  Committee and also active in political campaigns.  She was born and raised in Worcester.