Registration
Beginning Synchro Lessons: Register at the YWCA Front Desk or call 508-767-2505. Sessions begin in September, January and March and run for 10 weeks.

Novice, Intermediate and Age Group Teams: Requires Registration Contract. Enrollment is from September through June, and may be paid in full or through monthly automatic deductions. Contact Head Coach Janine Kopeski at 508-767-2505 ext. 3022 or jkopeski@ywcacm.org for more information.

Novice Synchro Team: Ages 8–12
Recommended for strong swimmers looking to learn basic synchronized swimming and learn a routine set to music. The team practices throughout the school year, once a week for two hours. Each two-hour session includes one hour of land exercise and one hour in the pool. Swimmers have the option to compete in the fall and spring, and perform in the Annual Water Show.

Competitive Teams
The Synchro-Maids’ three competitive programs prepare swimmers for shows and competition, which take place throughout the year. Practices take place during the school year. Commitment is required. 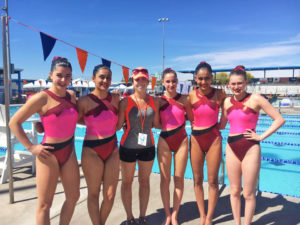